Posted at 06:54h in Uncategorized by zevrubin 0 Comments
0 Likes
Share 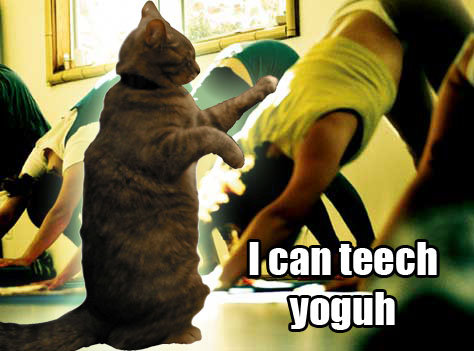 It was on a Friday evening in May that Josie Putnich achieved enlightenment. She was ass over teakettle in scorpion pose, little rivulets of sweat were stinging the bejesus out of her eyes and she felt herself slipping as she desperately tried to prevent her own heel from crushing her throat. Luckily, she fell over.

The class had already moved on to hero pose.  She pulled her face off the sticky mat, got onto her knees, and reclined into the asana.  Suddenly the sleepily coiled rope of Kundalini energy that had long slumbered beside her sacrum slithered up her spine and blasted it’s way through her crown! Josie’s rusted-out chakras began whirling into motion and every fiber of her being was at once engulfed in cascading layers of ecstasy.

Though the rest of the class had moved on to legs up the wall, Josie sat on her mat, gooey over the opening of the thousand-petaled lotus in her head. For the mother of two from Teaneck, time no longer existed! Light was matter! Alpha was omega! All the yoga teacher noticed, however, was that Josie’s legs were not up the wall.

“Is everything all right?” asked Karma Suntree, the tiny, blond Ashtanga teacher. She gave Josie’s arm a careful tap, but Josie did not move nor even flinch. The yoga teacher got down on all fours and put her ear next to Josie’s mouth, but Josie’s breath cycle had slowed to once every great 5000 year cycle–so it seemed to Karma that this woman wasn’t breathing at all!

“That’s not good,” said Karma. But Josie was well beyond the Dialectic in her state of rapture and she could not imprint the dichotomy of a “good” or “bad.” Instead, it seemed to her a sparkling ruby on a vast and sublime beach had uttered: “That’ssss .. ahhhh .. Goooooooood!” Josie would have agreed with the ruby if she’d thought it would make a difference, but she knew it would not.

Karma, by now, was downright alarmed–especially because Josie’s alignment was slightly off. Alignment was critical in order to really get the full benefits of the practice, Karma knew, certainly right up there with breathing. So she sidled around Josie and put a firm hand on each shoulder.  “Do you mind if I adjust you?” she asked.

Josie had never been offered adjustment by a ruby and she was quite happy to let it happen, or not. But her attention was far, far away from the analyzing beast of her mind, enraptured as she was by the exquisite vibrations in the union of her spirit and body. So she replied truthfully: “I don’t mind anything.”

Karma gently pressed on Josie’s shoulders with expert precision and pressure, moving them slightly to the right. A sour hiss echoed through Josie’s head as the Kundalini snake plummeted back to the floor of her pelvis, and she instantly remembered that she had to pick up her car at the shop by 5:45 at the latest. She rolled onto her side and began to sob softly into her yoga mat.

Sorry, the comment form is closed at this time.